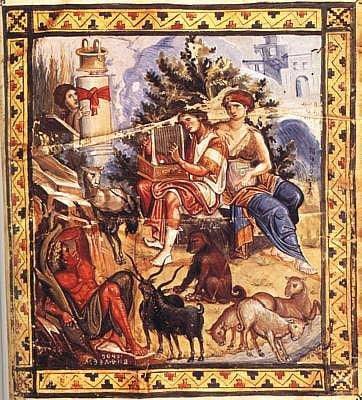 What is Music Therapy and what does it have to do with Eastern Christian psychotherapy?

Most psychotherapists are familiar with the task of having to explain their professions to the lay public and clear up common misconceptions. This task is magnified for the music therapist.

“What type of music should I listen to?”

“Have you seen the movie about iPods in nursing homes?”

“My kid has been in music therapy for a year and still isn’t playing Bach on the guitar. What gives?”

“So, what do you actually do?”

Perhaps these questions, all of which this writer has actually received, should be expected for a profession which often requires its trainees to read a book-length treatment of the question “how should we define music therapy?”

The easiest place to start is to give the definition supplied by the American Music Therapy Association: “Music Therapy is the clinical and evidence-based use of music interventions to accomplish individualized goals within a therapeutic relationship by a credentialed professional who has completed an approved music therapy program.”

This definition, while not perfect, immediately clears up a few misconceptions. Music therapy takes place with the involvement of a music therapist. So, no, setting up a calming Spotify playlist isn’t music therapy. The relationship between client and therapist is paramount. Music therapy is also clinical and evidence-based; it involves interventions that have been researched and are used to meet clinical goals. This is a handy way to separate music therapy from music education: music therapy involves using music to work toward non-musical goals, whereas music education involves working toward musical goals. Examples of non-musical goals include emotional regulation, impulse control, social skills, memory and attention, academic skills (math, literacy), fine and gross motor skills, sensory integration, and pain management. Playing an arrangement of Bach’s Prelude in D minor on the guitar is an example of a musical goal.

“Why does Mount Tabor Counseling have a music therapist on its team?”

Because music therapy is a great therapeutic fit for Christian clients seeking a way of healing for themselves, their children, or their entire families. Note that the first recorded instance of music therapy occurs between a young David and a troubled King Saul:

14 Now the Spirit of the Lord departed from Saul, and an evil spirit from the Lord tormented him. 15 And Saul’s servants said to him, “Behold now, an evil spirit from God is tormenting you. 16 Let our lord now command your servants, who are before you, to seek out a man who is skillful in playing the lyre; and when the evil spirit from God is upon you, he will play it, and you will be well.” 17 So Saul said to his servants, “Provide for me a man who can play well, and bring him to me.” 18 One of the young men answered, “Behold, I have seen a son of Jesse the Bethlehemite, who is skillful in playing, a man of valor, a man of war, prudent in speech, and a man of good presence; and the Lord is with him.” 19 Therefore Saul sent messengers to Jesse, and said, “Send me David your son, who is with the sheep.” 20 And Jesse took an ass laden with bread, and a skin of wine and a kid, and sent them by David his son to Saul. 21 And David came to Saul, and entered his service. And Saul loved him greatly, and he became his armor-bearer. 22 And Saul sent to Jesse, saying, “Let David remain in my service, for he has found favor in my sight.” 23 And whenever the evil spirit from God was upon Saul, David took the lyre and played it with his hand; so Saul was refreshed, and was well, and the evil spirit departed from him.

Notice that David had established a therapeutic relationship with Saul. Before his playing could have any effect, Saul needed to grow closer with David, his armor-bearer – to the point of “loving him greatly.”

Music, as so many of the ancients believed, is a particularly noble expression of man’s higher faculties. Playing music together provides a sense of community that profoundly affects us even at the physiological level. Rhythm imparts a sense of predictability that renders the world intelligible and safe. Recall the rhythmic nature of monastic life, or of the Divine Liturgy. Think of the familiar, calming rhythmicity of the Jesus Prayer and the accompanying inhalations and exhalations. Melody elicits emotional reactions that can be validating and cathartic. Consider the experience of being moved to tears by a beautiful aria, or the way music elevates an already poignant movie scene to new heights.

Finally, music is fun. For many children, “traditional” psychotherapy can be intimidating and uncomfortable. Children typically cannot tolerate sitting in a room with someone, especially someone new, and talking about their emotions or their behaviors. They enjoy singing, dancing, moving, playing. Music therapy offers children a sort of “alternate route” by which they can reach their therapeutic goals. Participating in enjoyable and rewarding music experiences often leaves children with the impression that they are just having fun when, in reality, they are doing profound work. Adults too can benefit from music therapy and music therapy interventions in the course of their healing. It has long been noted that modern psychotherapy, rooted as it is in a Cartesian chasm between mind and body, has lost touch with man’s creative, affective, and bodily experiences. Let us not forget that music is uniquely human and universal among human cultures. Let us remember the words of the Psalmist “My heart, O God, is steadfast, my heart is steadfast; I will sing and make music.” (57:7)

This article is not intended to be or to replace professional counseling or medical advice.